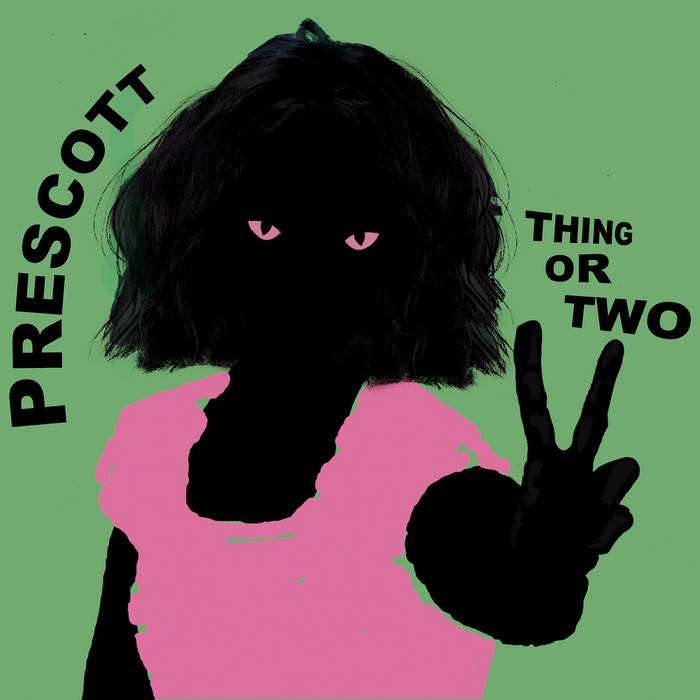 runciblemoon Pure concentrated slabs of greasy, nutritious wonk. Prescott seem to exist in their own pocket universe devoid of musical genre or context, and they're all the better for that. Keith Moliné's twangy surf-like guitar is a lovely addition, building nicely on the sound established on their debut album. My favourite album of 2017. Favorite track: Cis 3 Hex.

After the 2014 release of their first album, One Did , Prescott acquired a fourth member in Pere Ubu’s Keith Moliné and a newfound affection for twangy guitar tunes. The new record builds on the arty, minimal intensity of their debut with sweeping melodies and extravagant
arrangements.

The startling bass playing of Kev Hopper, the group’s founder, is
sprinkled with unexpected pops, slides and trills, a series of musical question marks and raised eyebrows. Frank Byng’s precision
drumming is pared down and funky one moment, wildly uninhibited the next, all interweaving with Rhodri Marsden’s broad palette of organs, percussive samples and stabbing synths. Keith Moliné brings improvisatory skills acquired over two decades working with Pere Ubu’s David Thomas, along with the tranquil Hank Marvinesque twang that characterises much of the record.

Five Thing , a live favourite, is a foxtrot for anyone who happens to have an extra leg. Oh Stemona incorporates Sue Lynch ’s flute and sax in a song of praise to a perfume ingredient. Seven Leggings is as near as Prescott get to verses and choruses, with a humalong tune and a jubilant fadeout. Rubberised is an extraordinary musical jigsaw puzzle, culminating in squeals of frustration from sound artist Iris Garrelfs as she fails to solve it.

Thing Or Two : exuberant and complex, euphoric and bewildering, joyous and ambitious.


“Prescott are a unique and mischievous proposition” – The List

“A dishevelled Heath Robinson contraption of small moving parts, Prescott make music as hilarious as it is infuriating” – The Wire

“As perplexing as their namesake, Prescott demonstrate the forgotten art of the confounded, the contrary and the confused, with compelling results” – Flipside

Bandcamp Daily  your guide to the world of Bandcamp